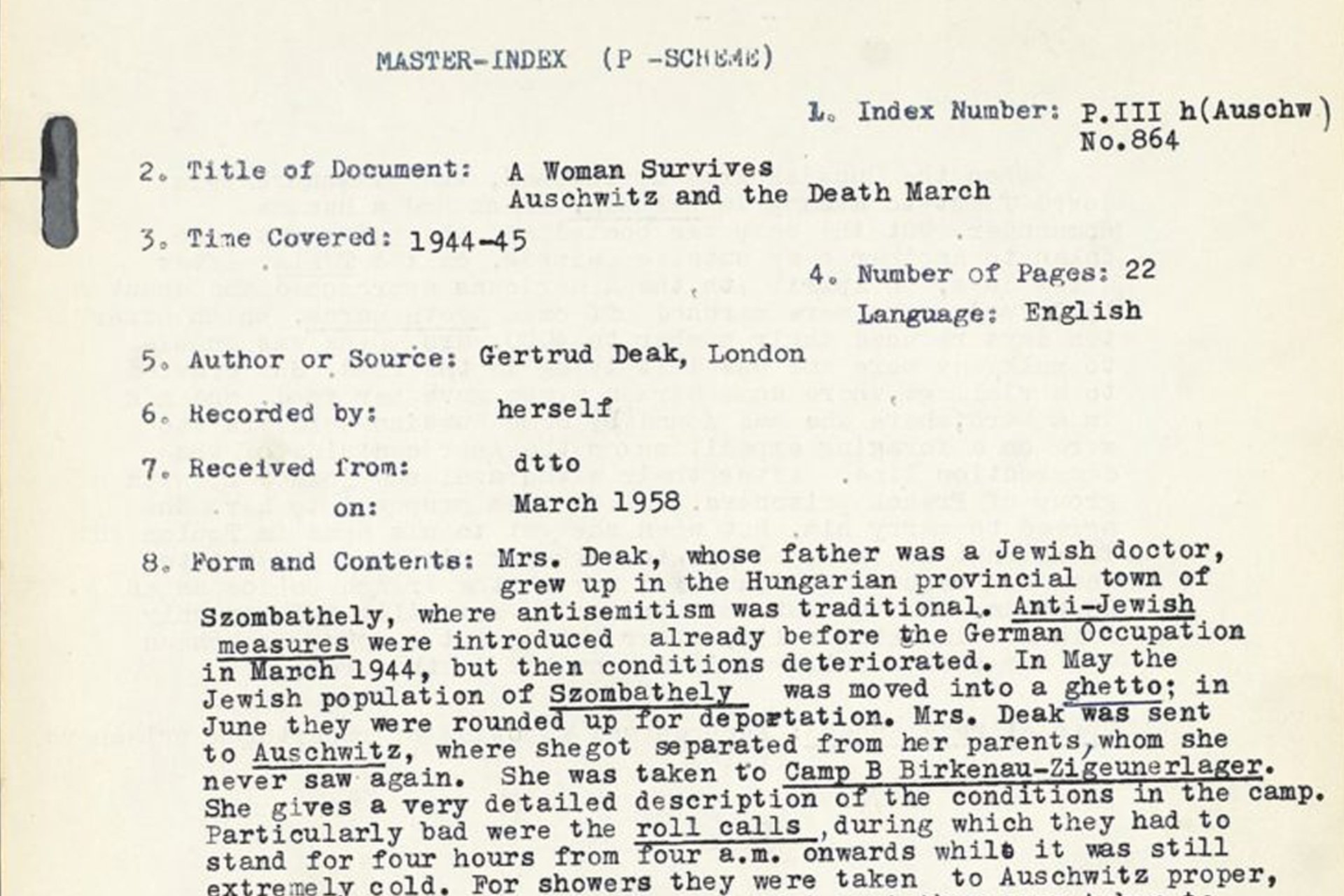 Trude Levi: The After-Effects of the Death Marches and ‘Liberation’

This blog, written by Dr Christine Schmidt and Professor Dan Stone, examines several accounts given by Hungarian Holocaust survivor and former Wiener Holocaust Library staff member Trude Levi, whose story features in the current Death Marches: Evidence and Memory exhibition. Her memoirs outline the changing concepts of ‘liberation’ and the idea of the ‘survivor’ in British history.

“It must have been about half past 5 in the morning and though from hunger, weariness and cold we could hardly drag ourselves, some human hope and spark must have been present still in some of us, as I shall never forget the most beautiful sunrise, which was like a Dürer landscape. It was the morning of my 21st birthday. We crossed the bridge, which I still managed to do, but already suffering, apart from starvation and all else, from terrible dysentery, and I could go on no more. I fell down, was noticed by a guard, who kicked me a few times with his boots, struck me with his gun, but as I could show no more reaction at all, he did not know what to do. I still heard him saying: “Sie ist keine Kugel mehr wert” [She’s not worth the bullet], with that, he gave me a final kick, and the troupe went on.” 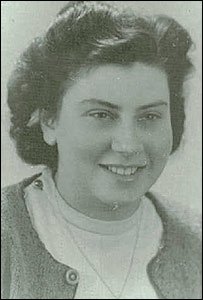 Trude Levi, photographed just before the outbreak of the Second World War.

This is how Hungarian Holocaust survivor Gertrude Deak (later known as Trude Levi) described her narrow escape from a death march in an account she recorded for the Wiener Library in 1958. Levi had been evacuated on foot from the Leipzig-Thekla subcamp of Buchenwald along with, by her estimates, some 15,000 former inmates. After ten days, only about 4,000 remained alive. She was sent to Leipzig-Thekla from a camp in Hessisch-Lichtenau ahead of advancing Soviet troops, after having been deported to Auschwitz-Birkenau from her home in Szombathely, Hungary.

Levi was among the hundreds of thousands of surviving camp inmates who were sent on forced marches as the German army retreated in the last months and weeks of the Second World War. Prisoners were sent out on foot, by rail, in horse-drawn wagons, in lorries, and by ship. Conveys split, dispersed, and rejoined others, with routes stretching from several dozen to hundreds of miles long. Thousands of people were murdered en route in the last days before the war’s end. As our current exhibition, Death Marches: Evidence and Memory shows, many of the more than 700,000 remaining prisoners of the camps were forced on these evacuations and did not survive, although we still do not know (and may never know) exact numbers. Eyewitnesses and survivors, like Trude Levi, described seeing those who collapsed along the routes being executed. In Levi’s case, the indifferent flippancy of the SS guard spared her life – but only just. Her struggle to remain alive went on for weeks, and as her account shows, ‘liberation’ was not a moment of jubilant freedom.

In fact, like most survivors, Levi’s postwar story was complex and she enjoyed nothing like a rapid ‘return to normal’. According to an interview done with Gaby Glassman in 1989, she only felt truly ‘liberated’ when she left Germany for France. In her account, some of the specific threats faced by female survivors are shockingly clear. Young and in need of love and support, she turned to a French male political prisoner survivor who took her in and showed her attention. She fell in love with him and agreed to go with him to France. In fact, when she arrived at the man’s house, it turned out that she was being exploited: the family tried to enlist her as a prostitute. Refusing to comply, the French survivor falsely accused her of being a German collaborator, and she was imprisoned in Marseilles alongside fascist collaborators. Only the fortuitous presence of another survivor from Thekla who testified that she was who she claimed to be allowed her to secure her freedom. She met and married Stephen Deak, another Hungarian survivor, and in 1957 came to England via South Africa and Israel.

Like many other Jewish and other refugees, Levi did odd jobs to make ends meet after she settled in London. In her celebrated memoir, A Cat Called Adolf, she recalled giving an account of her experiences to Dr Eva Reichmann, whom she met when she tried to enquire if there were jobs available at the Library. “During the interview, I was offered a small sum to write an eyewitness report on my deportation from Hungary. I was given a report to read as an example of what was required. The report was by a cellist from Germany who had been in the Auschwitz extermination camp orchestra. She was now married to the fine pianist, Peter Wallfisch, and, as it happened, we had visited them only a few days earlier. I always had a good memory for faces and when we visited the Wallfisches, I seemed to remember Anita’s face. But there seemed no way we could have met, or so I thought. Now, from her eyewitness report, I realised that she was the cellist I had spoken to the day before we were taken from Auschwitz.”

The Library has one of the earliest accounts Levi gave. In the mid-1950s, when Jewish historical commissions were beginning to wind down their vital immediate postwar work of collecting Holocaust documentation and survivor testimony, Eva Reichmann, then Director of Research at The Wiener Library, launched an initiative to gather as many eyewitness accounts of the Holocaust as possible. The project lasted for approximately five years and until its closure, amassed about 1,300 eyewitness reports in seven languages. These are now being translated and made available via the Wiener Library’s new digital resource, Testifying To The Truth.

Levi published two memoirs, A Cat Called Adolf (1995), and Did You Ever Meet Hitler, Miss? (2003). In them, we can trace the formulation and changing meaning of the idea of the ‘survivor’ in Britain. She accepted this role with some trepidation, feeling more visible and stigmatised as a camp survivor than when she had been labelled as a refugee. “I also quite enjoyed my work at the Library,” she wrote, “and found it extremely interesting, though somewhat harrowing. Its emphasis was on the history of Nazism and the Holocaust and, as the only person on the library staff who had survived the concentration camps, I felt I was being used as a guinea-pig supplying information to journalists.” She referred again to this period in a testimony she provided for the USC Visual History Archive in 1995 when she explained how working at the Library forced her to confront her ‘status’ as a survivor on a daily basis: “because I worked at the Wiener Library for four and a half years, which was a library of the Holocaust. And I was constantly confronted with Holocaust material and also with questions constantly, because I was the only person there who was a camp survivor. And there was the Eichmann trial on, and there were other incidents coming on, and newspaper people came and reporters came…and people who worked there said, ask her. She knows about it. She was there.” (Interview 7093, now available for access at the Library.) It is noteworthy that although this interview was conducted in the 1990s, what Levi says about the Library indicates that there was a growing interest in the Holocaust in Britain in the 1960s.

Trude Levi was a prolific speaker, particularly in her later years, for various Holocaust-related organisations in the UK, but an excerpt of Levi’s account was also displayed in an exhibition Juden in Leipzig, which was held on the fiftieth anniversary of Kristallnacht, from 5 November to 17 December 1988 at the Kroch-Hochhaus at the Karl-Marx-University, Leipzig. The account was excerpted and translated from Hungarian to German and focused specifically on the march from Leipzig to Riesa. 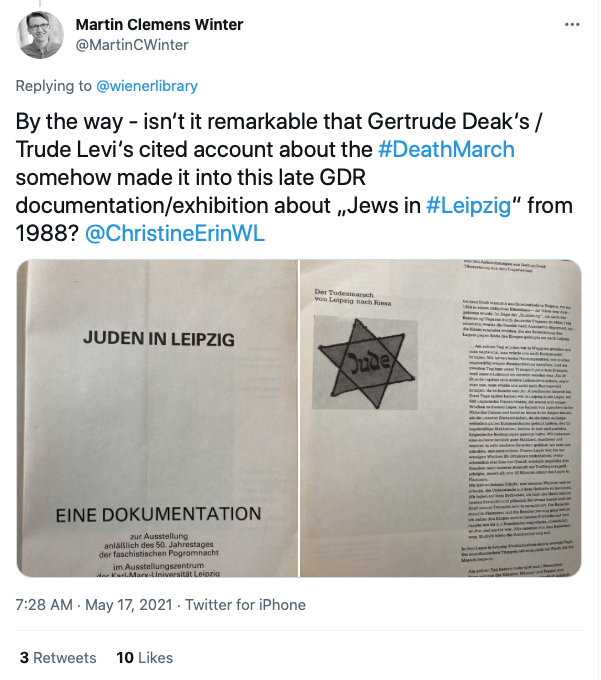 With thanks to Martin Clemens Winter for providing this information.

In later life she became a well-known figure, speaking on a regular basis to students, Holocaust-related organisations, and other groups, both in the UK and abroad, and met Prime Minister David Cameron. She reflected on her experiences as a survivor educator in the Journal of Holocaust Education in 1998. But her fame did not alleviate the feelings of mistrust and wariness that accompanied her wartime experiences.

“Before the war, as far as I can remember, I was extremely trusting, but the experience with friends – or those we thought were friends – left deep wounds and a permanent scar. Today, I would still like to trust people, but deep down I do not because I am often suspicious when there is no real reason to be wary. It makes me sad. It was not only the so-called friends in Szombathely who made me suspicious. The behaviour of co-inmates in the camp added to these feelings of mistrust which still, though less and less often nowadays, cause me to question trusting people, wondering how they would react under adverse conditions.”

The various accounts she recorded demonstrate how Levi continued to grapple throughout her life with her experiences during the Holocaust. Likewise, the Library’s current exhibition shows that the death marches’ after-effects were long-lasting, with survivors and their descendants continuing to try and understand them to this day.