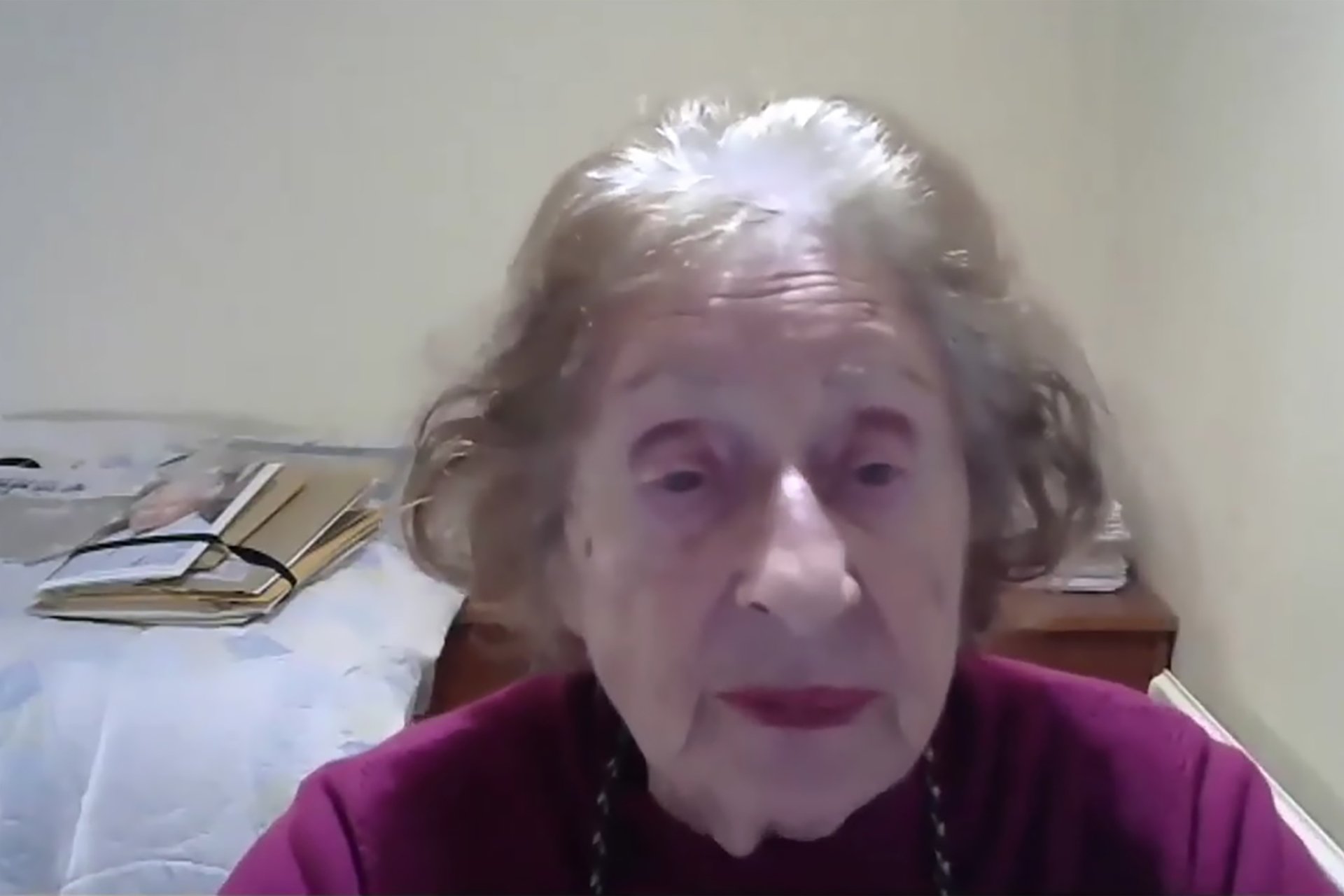 Highlighting the Voices of Survivors

In this article, a version of which originally published on The Jewish Chronicle website, Dr Christine Schmidt, Deputy Director and Head of Research at The Wiener Holocaust Library, reflects on the prevailing power of survivor testimony.

“We were without a voice, in the bitter cold, on a long, long walk. That was a death march.” Susan Pollack, a Hungarian Jewish woman who survived the Holocaust at the age of 14, spoke these deceptively simple words this month at a virtual event hosted to mark the launch of the Holocaust and Genocide Research Partnership’s new exhibition focused on the death marches, the forced evacuations from the Nazi camps at the end of the Second World War.

Her remarks were brief, composed, and yet disturbing in their detail. She was forced on a death march from a slave labour camp to Bergen-Belsen. The experience shapes her life to this day.

We often hear concern about what will happen to Holocaust education and memory “after the survivors die”. This is not a new debate. But it also implies that we’ve learned all there is to learn from survivors, like Susan, who are very much still with us. Remarkably, Susan spends much of her time speaking to learners of all ages for key Holocaust education organisations in the UK, such as the Holocaust Educational Trust. In 2020, her webcast for Holocaust Memorial Day, was broadcast to thousands of students. Prompted to speak about her experiences in Belsen, Susan provided a fleeting account of the death march.

Yet, as her testimony during the event showed, the extreme brutality of the march deeply marked her experience, and that of tens of thousands of other survivors of “liberation” and survival, just as much as Auschwitz-Birkenau and Bergen-Belsen.

Contrary to widespread belief, survivors did speak about their experiences, including the death marches, in the days and months following the end of hostilities. Most were in terrible physical condition – and some did not survive very long after they began to receive medical assistance from Allied armies and humanitarian relief groups. Soon after war’s end, evidence was gathered about the tortuous evacuations that the Germans perpetrated, as they sent prisoners on brutal marches that crisscrossed Germany. These “mobile concentration camps” came within sight of many villages and towns across the country. Bodies of those executed and discarded en route were found, and while many could not be identified, most were reburied with some form of dignity. The people who had survived, civilian witnesses who saw what happened, and victims’ bodies that had been recovered form the basis of evidence of what we know today about the death marches.

The Wiener Holocaust Library’s latest exhibition, Death Marches: Evidence and Memory, which will be on view in London and also in Huddersfield at the Holocaust Exhibition and Learning Centre from May/June 2021 through the summer, describes a significant part of the history of “liberation” that is not fully understood or researched, and also reveals the process of gathering evidence and how historians and other scholars have used this evidence to write the history of the death marches over several decades.

It is an exhibition about the marches themselves, and also about how research is done. And it rests on transforming existing scholarship conducted by historians like Daniel Blatman and Danuta Czech and new work by Dan Stone into a digestible, three-dimensional format.

The new exhibition programme offers a challenge to National Holocaust Centre and Museum CEO Marc Cave’s recently stated view that “there is brilliant academic scholarship on the Holocaust but too little of it benefits the mainstream.” He asserted that “the public” only “harvest the chaff” and “not the wheat” of scholarship.

While it is true that there is often a gap between public understanding of the Holocaust and the latest academic research, our experience shows that this is not for lack of interest or due to a lack of will – either from the public or from many scholars working in the field.

What we can agree on is that there needs to be more, concerted public engagement on the Holocaust framed to ensure that new scholarly findings – and insight into how those findings are reached – are made widely available.

The Death Marches exhibition evolved from a new partnership that takes up this very challenge: The Library is working with the foremost scholars in Holocaust and genocide research in the UK at the Holocaust Research Institute, Royal Holloway, University of London, as well as partners in the North, the University of Huddersfield and the Holocaust Survivors Friendship Association, with the express purpose of ensuring that Holocaust scholarship informs public debate. The Holocaust and Genocide Research Partnership (or HGRP) aims to build a dynamic, inclusive research vision to ensure that public knowledge of the Holocaust and genocide is shaped both by expert knowledge and survivors’ voices. Likewise, we hope that little understood aspects of the history of the Holocaust and other genocides, including those ongoing today, help inform scholarly research agendas.

The HGRP’s first virtual launch event for Death Marches: Evidence and Memory – which has already attracted hundreds of viewers – as well as the Library’s track record of engagement across our events and exhibitions, demonstrate that there is public will to engage with scholarship that lacks “bland universalist clichés,” in Cave’s words. Neither the launch nor the exhibition resort to cliché, since the history of this horrific aspect of the Holocaust and end of the war offer few, if any, life lessons. Nor was there any message of redemption in Susan Pollack’s remarks, which she made with both grace and even some humour.

The death marches were an important part of “liberation” for Susan and thousands of other survivors. We hope the exhibition and related events – soon to be announced and featuring both survivors and scholars – will highlight survivors’ voices, including those who are still living and willing to speak, if only they are asked.