Virtual Panel and Film Talkback: Complicit and The Legacy of the St Louis

The Wiener Holocaust Library and the Holocaust Research Institute at Royal Holloway, University of London, are delighted to host The Legacy of the St Louis Virtual Panel as part of its of Holocaust and Genocide Partnership activities. 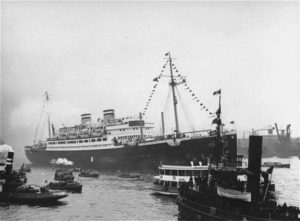 This free online event will follow a screening of the documentary film, Complicit, and will include the creator and producer of the documentary, Robert Krakow, Esq., as well as former child refugee passengers on the MS St Louis.

Viewers will have access to view the award-winning documentary beginning on 17 July. During the event, they will have the opportunity to hear from Mr Krakow and to ask questions and hear reflections from former passengers of the MS St Louis.

Complicit is a fascinating blend of drama, survivor interviews, and actual footage retelling the story of the MS St. Louis, a German luxury ocean liner, that set sail from Hamburg, Germany to Havana, Cuba in the spring of 1939. The 937 mostly Jewish passengers were attempting to escape Nazi persecution. Turned away by the Cuban government and then thwarted by American and Canadian authorities, the captain was forced to return the ship and its passengers to Europe where more than 250 passengers perished in death camps. The Hollywood Reporter, in reviewing the film, observed that “A shameful piece of WWII history is recounted firsthand” and a critical history lesson—not found in students’ textbooks today—is laid bare by the filmmaker. 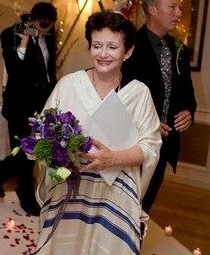 Judith Steel: Kew Gardens, NY:   As a child, Steel evaded Nazi persecution in Germany when a French Catholic family took her into their home—an experience that informed her view that love does not always fit within the neat confines of religion. She was the cantor at the New Synagogue in Manhattan. She attended the 2009 70th Anniversary St. Louis passengers reunion in Miami Beach and signed Senate Resolution 111 which was accepted into the Treasures Vault of the National Archives.  Senate Resolution 111 was passed unanimously in May, 2009 and acknowledged the importance of learning the  lessons of the saga of the St. Louis.  Judith appears in the documentary film, COMPLICIT, which has been touring the US and internationally since 2014. Judith together with Sonja Geismar and Eva Wiener participated in Canada’s apology ceremony in November, 2018 where Prime Minister Justin Trudeau addressed the passengers in the House of Commons and offered his heartfelt apology for Canada’s refusal to grant safe haven to the passengers aboard the SS St. Louis

Sonja Geismar – Bronx, NY:  In May 1939, Sonja’s parents, paternal grandparents, two great aunts, and another great aunt with her husband were passengers on the St. Louis..  In Havana harbor, she remembers the tenders and waving to cousins who came to see their grandparents who unfortunately went to Belgium and met their fate in a gas chamber.  Sonja and her parents went to  England  and when  their quota numbers were reached, they 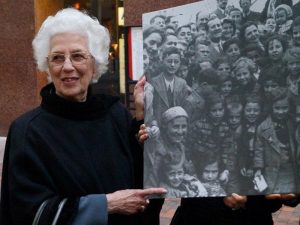 sailed into New York harbor on February 11, 1940 and the Statue of Liberty came into view.  Sonja became a high school social studies teacher. Years later she changed the direction of her career by returning to graduate school for her second Master’s degree. She became a high school librarian in an inner city school and after ten years became head librarian.  Sonja together with Eva Wiener, participated in the mission to Jerusalem where they told their stories at the Knesset, Yad Vashem and Hebrew University.

Eva Wiener – Neptune, NJ:  Eva Rose (Safier) Wiener was born in Berlin, Germany during the rise of Hitler.  To escape the Nazis, her parents were able to book passage on the St. Louis, for its ill-fated voyage to Havana, Cuba.  When the ship was forced to return its passengers to Europe, Eva and her parents were among the fortunate ones to be accepted into the quota for England.  They immigrated to the United States in May of 1946. Eva was employed as a Budget Analyst at Fort Monmouth, an installation of the U. S. Department of Defense. While at the Fort she was instrumental in establishing 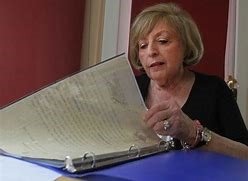 a yearly program commemorating the Holocaust.  This program grew to become the most successful program of its kind for a military installation.  She has been Past President of the Monmouth County Chapter of B’nai Brith Women and the Gibor Zimel Resnick Chapter of American Friends of Magen David Adom.  In November of 2006 Eva was honored by being the recipient of the Eishet Chayil (Woman of Valor) awarded by the Central New Jersey Women’s Branch for Conservative Judaism.  In 2012 Eva was selected by her synagogue as the Woman of the Year.  In May of 2012 Eva also received a “Certificate of Special Congressional Recognition” for “invaluable service to the community” presented to her by Congressman Frank Pallone, Jr.

John Shilling – Lantana, Fl:  The first five years of his life were spent moving as far away as possible from a tempest before the storm better known as WWII and the Holocaust.  John was born in Prague, spent his preschool years in Holland and Ecuador, and first and second grade in Orlando, Florida before moving to NY. He graduated from Forest Hills High School, Queens College, and Columbia University College of Dental Medicine and practiced general dentistry on Long Island in Copiague and lived in Melville NY.  He was in the Medical Corp as a dentist in the Air Force from 1962 to 1964Since his retirement he has had the opportunity to share his family’s story of emigration with HS students and with organizations interested in stories and experiences such as mine. 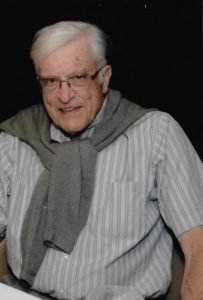 Event guidelines for those joining online: