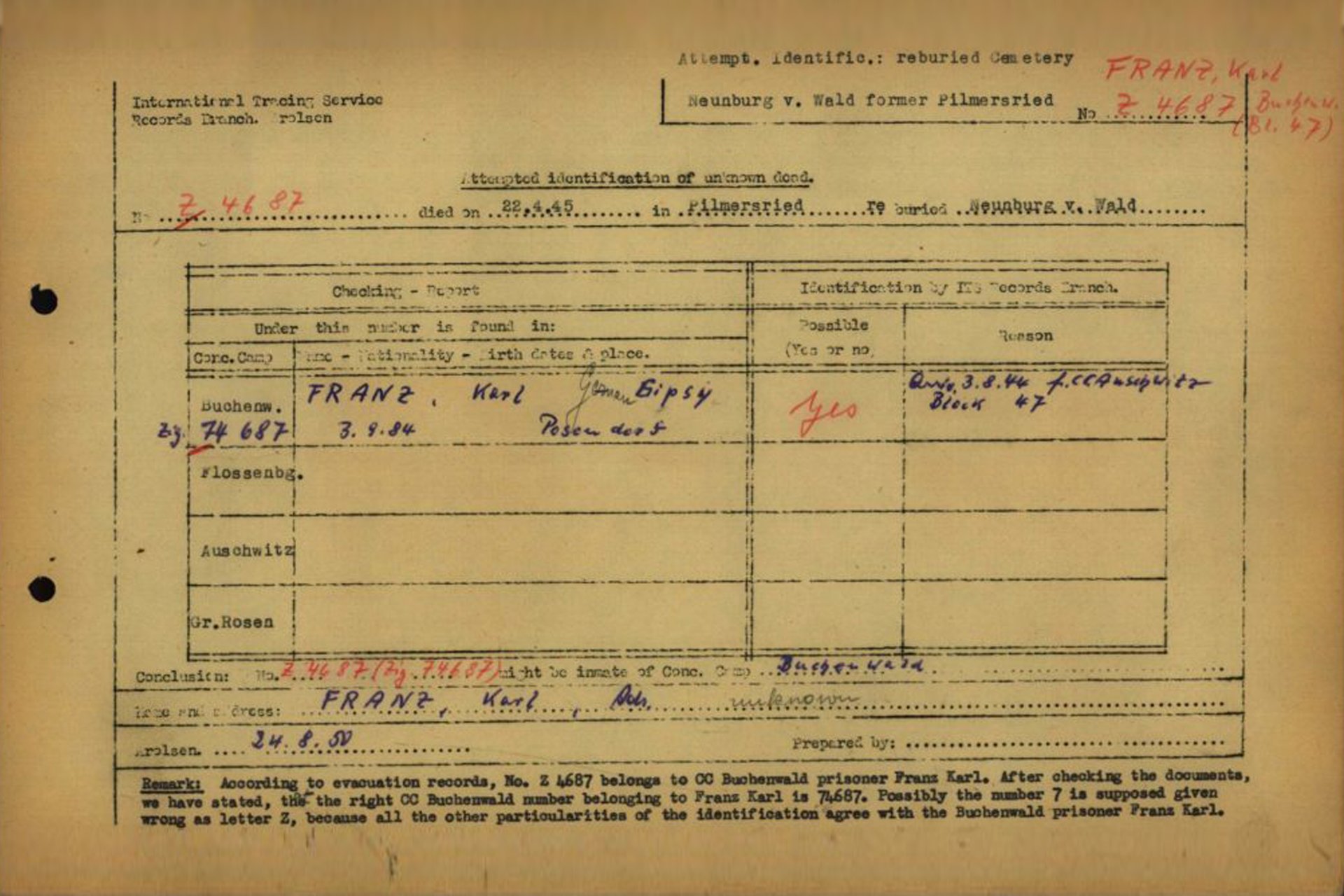 Entangled Histories: Jewish and Roma and Sinti Victims of the Death Marches

This blog, researched and written by Death Marches: Evidence and Memory co-curators Dr Christine Schmidt and Professor Dan Stone, explores the case of Karl Franz, a German Sinto man who likely died on a death march in the last days of the Second World War. Karl Franz’s case illuminates intersections between the history of Jewish and Roma persecution and the ways in which that persecution is documented in the archives.

While curating and engaging visitors with the Library’s current exhibition, Death Marches: Evidence and Memory, it has become clear to us that many seemingly basic aspects of the history of the death marches are still unknown: the who, when, where and why’s of this period. One question frequently raised by our audiences has been about the purpose of the marches carried out in the last weeks and months of the Second World War: why didn’t the guards murder the surviving inmates immediately, rather than send them on miles of brutal marches, the geographic expanse and trajectories of which cannot be conveyed adequately by traditional cartography (the where)? The exhibition and the catalogue discuss interpretations of the purpose of the marches that have been developed by different scholars, such as Daniel Blatman and Daniel Goldhagen. Other queries, such as how many died on the marches, remain difficult to estimate accurately. In January 1945, there were more than 700,000 prisoners remaining in the Nazi concentration camp, with at least 35 per cent dying in this “last murderous eruption” of Nazism.

On the other hand, we might think that the who is somewhat more clarified. As Blatman noted, Jews were a dominant group among those evacuated on the marches, but they were not the only victim group who suffered on them. We know more about the biographies and experiences of some victims and survivors of the death marches, largely through documentation efforts that collected testimonies and other evidence related to the destruction of European Jewry, flourishing particularly in the early postwar period. This means that much of our knowledge about the experience of enduring the marches comes from archival collections primarily focused on Jewish victims. For example, the Library’s own eyewitness accounts collection, gathered in the mid-1950s and now being translated and published online, has more than 90 accounts that mention the death marches, most of these from Jewish survivors. The exhibition includes many accounts and photographs of Jewish victims and survivors, and we have hosted events with Jewish survivors, including Iby Knill and Susan Pollack. The exhibition also depicts commemorations led by French political prisoners who survived the marches from Flossenbürg to Cham, as well as scant, but important, documentation of the German Sinto victim, Karl Franz, who did not. Franz’s case illuminates intersections between the history of Jewish and Roma persecution and the ways in which that persecution is documented in the historiography and archival collections.

Documentation about Franz’s fate is found in another major source of information about the marches, the International Tracing Service (ITS) archive, now called the Arolsen Archives. This collection contains the records of postwar investigations by ITS fieldworkers of death march routes and identification of bodies left on those routes, a programme eventually called “identification of the unknown dead”. The ITS retraced the steps of the marches and tried to find where victims had been buried, often after “forced confrontations” by Allied militaries and, where possible, to identify and rebury them. The ITS archive contains 30 million documents relating to the fate of some 17.5 million people, including Jews, Roma and Sinti, and other victim groups. The intersecting fates of these groups are evident in records associated with these investigations, which document the recovery and attempted identification of victims’ bodies.

For example, these handwritten draft forms from exhumations at Neunburg vorm Wald in Bavaria include Polish, Slovakian and Hungarian Jews, and French and Russian political prisoners, among other victim groups, who had perished on marches that had passed in the area: 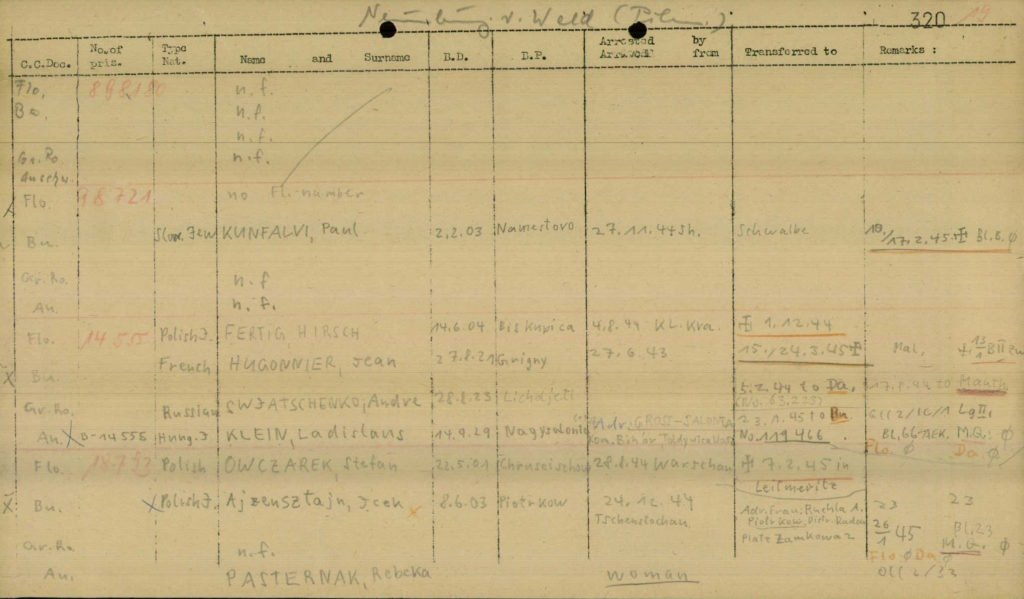 Evaluation of data on unknown foreign and unknown fatalities from concentration camps and their gravesites, Neunburg vorm Wald. ITS Digital Archive, WHL 84609942 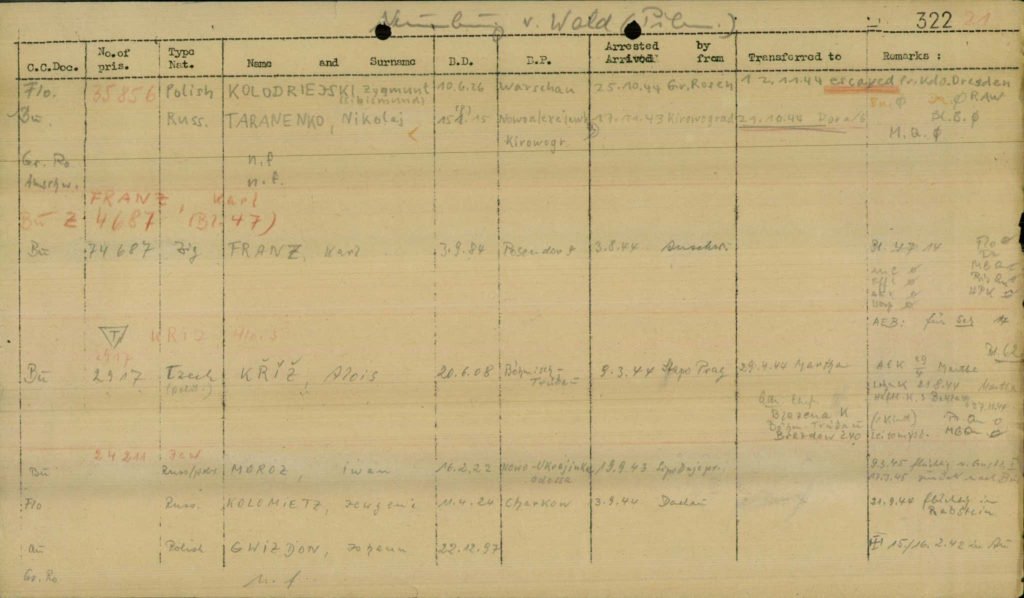 Evaluation of data on unknown foreign and unknown fatalities from concentration camps and their gravesites, Neunburg vorm Wald. Karl Franz is listed on this page, with notations in red, near the top. ITS Digital Archive, WHL 84609944

Karl Franz’s name appears on one document of thousands associated with these investigations, a list of possible identification of victims who had been reburied in the cemetery at Neunburg: 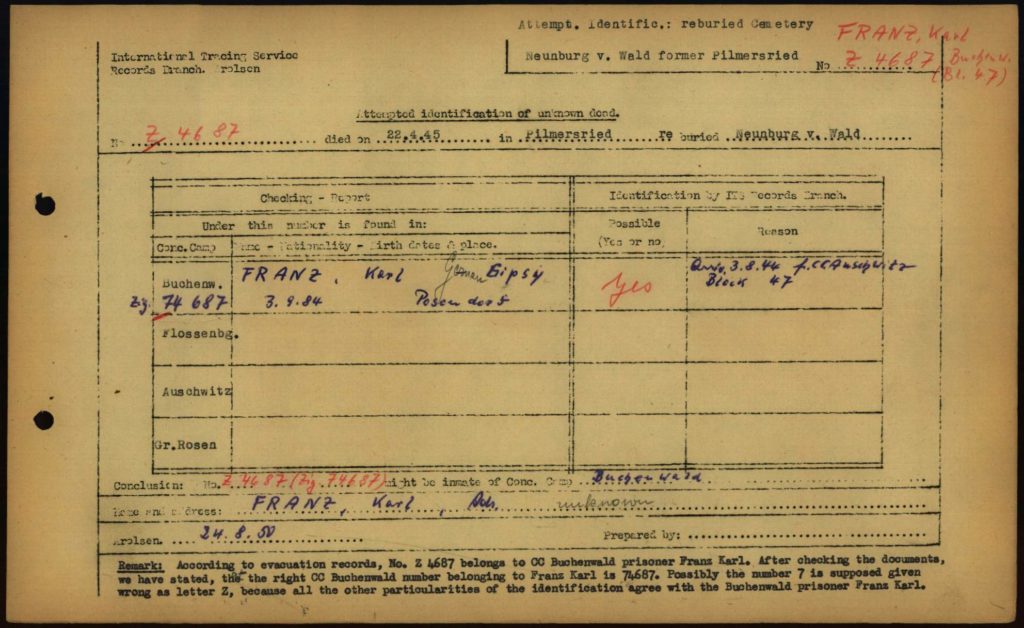 The Attempted Identifications, dated August 1950, lists Karl Franz’s prisoner number issued in Buchenwald, 74687 (at first incorrectly identified as Z-4687), which was presumably found on Franz’s clothing when his body was exhumed. The ITS Records branch determined that a prisoner with this same number had been sent from Auschwitz to Buchenwald in August 1944. According to Buchenwald records, Karl Franz had been categorised as a “work shy Gypsy” as well as an “asocial Gypsy”. Biographical details from records confiscated after the liberation of Buchenwald matched those of items found with Franz’s body, which included a glasses case, Buchenwald camp vouchers, and photographs of his wife (where she is named on the back) and children, among other personal belongings. The report concludes: “Because of the objects found with the dead, the dead body can almost certainly be identified as the prisoner Franz, first name Karl.” The form indicates a red “yes” under “Possible identification”, which suggests that this was very likely – though not definitively – the body of Karl Franz.

In the meantime, in December 1949, one of Karl Franz’s daughters, Lina Exel, had written to the ITS from Munich because she was still searching for her father. Exel wrote: “I request information about whether my father is still alive and about his remains, and further I ask for photographs and records about my parents as the Bavarian aid organisation told me that all records from Buchenwald and Auschwitz are in your possession” (ITS Digital Archive, WHL 85750040). Exel knew by this time that her mother had died in Auschwitz but held out some hope that her father might still be alive. An internal memo to the ITS’s Certificate Section in August 1950 indicates that a “negative reply pertaining to this case was forwarded by this Section because the person concerned is a German-Gipsy.” For her mother, Hedwig Franz, “the same like Karl Franz” is recorded (ITS Digital Archive, WHL 85750046). The attempted identification of Franz’s body was dated August 1950 so it is possible that the ITS did not reply to Lina Exel with definitive information because they did not yet have it. However, the internal reasons given (“the person concerned is a German- Gipsy”) suggests that there were also likely antigypsy prejudices at work. On 13 September 1950, the ITS replied to Exel that no record of death for her mother could be found, and it is likely the same reply was sent about her father, although this is not found in the records of her tracing request.

Ten years later, the response of the ITS to a similar request for information about Franz changed – this time submitted with the help of a solicitor. In 1959, another of Franz’s daughters, Elisabeth Blum, wrote via Gabriele Lehmann, a locally renowned solicitor in Nuremberg, to obtain certificates of incarceration and death certificates for her parents, presumably for a compensation claim. A Certificate of Incarceration documenting Franz’s imprisonment in Buchenwald was issued with the note below on the back – it indicates that a death certificate could not be issued as they were still unsure whether the exhumed body was Karl Franz, and a copy of the Exhumation Protocol was sent. 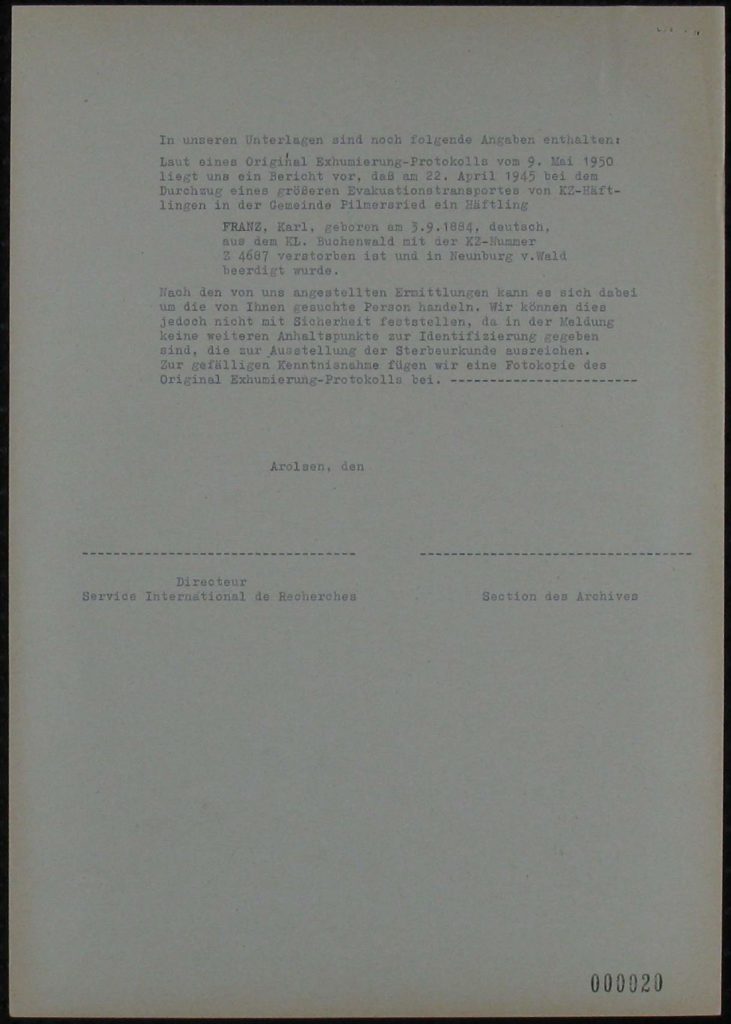 Irrespective of the precise timing and the reasons for ITS’s seeming inconsistency with respect to the identification and issuing of a death certificate for Karl Franz (Hedwig Franz was in fact issued one in 1971), one of the things we see here is the truth of Ari Joskowicz’s insight that “those who came to question Romani families after the war and demanded their cooperation represented the same institution – the criminal police – that had sent Romanies to their death during the Holocaust.” Although the ITS was not the police, for Roma survivors, they represented officialdom; corresponding with ITS was obviously fraught with anxiety, not just because of wanting news of loved ones but because dealing with authorities, especially German ones, was generally to be avoided. Relatives of Roma victims of Nazism were far less likely to have had legal representation than Jewish survivors and, as we see, had to engage with the authorities on their own initiative and handle the often unhelpful response as best they could. It is unclear from these records whether the sisters communicated about their search, but the change in the response of the ITS upon the intercession of a lawyer is noteworthy. Jewish survivors too struggled for years, even decades, to obtain compensation or information, but at least for those outside of the communist bloc, some help was available in the shape of the Claims Conference and lawyers – many of them survivors themselves – who could grapple with the requirements of the West German Federal Restitution Law (Bundesentschädigungsgesetz).

What this simplified comparison of Roma and Jewish experiences of dealing with ITS indicates, as Joskowicz rightly points out in his work, is that Jewish and Romani histories are entangled. We see this clearly in archives related to the death marches. Joskowicz observes how not only “different Jewish institutions and individuals but also the model of the Jewish Holocaust have come to shape the collections and narratives of the Romani Holocaust”. He then goes on to say that: “As the relationships at stake here are profoundly asymmetrical, they remain more central to the political identity of Roma than Jews: even today, Romani history cannot be written without taking account of Jewish archival and memory politics, whereas Romani experiences remain a marginal concern within Jewish history. Jewish historians would nonetheless do well to consider this blind spot in their field, as doing so allows us to interrogate the role of Jewish power and powerlessness in the creation of the historical imagination and record of the twentieth-century West. For Romani historians, these connections are an everyday reality that is often noted, sometimes lamented, but rarely systematically explored.”

Examples of the sort of asymmetry that Joskowicz describes are not hard to find. In the USC Shoah Foundation Visual History Archive, now accessible at the Wiener Holocaust Library, more than 9,500 testimonies record the term ‘death march’ in its Holocaust-related collections. The overwhelming majority of them are indexed as Jewish survivors, with smaller numbers of “experience groups” represented (political prisoners, Jehovah’s Witnesses, etc). Fifteen are indexed as Roma and Sinti survivors. It is likely, however, that a close inspection of the 9,500 testimonies includes other descriptions of Roma victims and survivors and their experiences.

In the case of Karl Franz, what we are faced with is not so much a non-Jewish individual located in a “Jewish” archive, since that is something the ITS never was. Rather, we are confronted with the fact that structurally, ITS was better able to assist Jewish than Roma survivors and their relatives, not only because of the terms of various compensation treaties such as the Luxembourg Agreement of 1952 between West Germany and Israel but because of persistent antigypsyism in West Germany and elsewhere, and because Roma communities were more afraid of dealing with officialdom than were Jewish communities and their national and international representatives. And, confirming Joskowicz’s claim that Roma experiences are inseparable from the Jewish archival record, Franz appears to have been the sole Roma victim identified among the bodies exhumed at Neunburg. Whether this was because there was less urgency to identify Roma victims in Neunburg (and other sites) or not is a question that we are trying to answer by examining the files. As this case shows, the answer to the query that we are often asked about who suffered on the death marches remains to be told.